Terrorism and refugees still dominate the headlines. It makes us wonder if contemporary jewellery design contributes to a better world? Part of our community considers jewellery unfit for the purpose due to its intrinsic value (adornment). The other half thinks jewellery can make a difference. That’s our kind of reasoning. If just one person’s opinion is changed; jewellery has done its job. We have some examples…

Loukia Richards (Greece) specializes in textile, in many cultures and traditions considered a material symbolizing life. Richards works with embroidery, weaving, sewing and knitting. Her ‘pseudo-naivité’ imagery serves as a Trojan horse to make confrontational statements on politics, gender-issues and disasters. Like the necklace she made after the Paris’ Charlie Hebdo massacre last year.

The weeds in her jewellery are called invasive species and are viewed as noxious. Yager sees them as beautiful. “After all, aren’t we also invasive species? Except for native Americans, none of us started here,” clarifies Yager.

She is taken with lamb’s quarters, dubbed the world’s ‘worst weed’. “Would you say that about a person? I think it’s a wonderful plant,” Yager concludes.

To look forward to: the line-up for the SIERAAD jubilee coming November includes Loukia Richards! 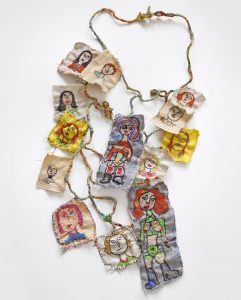